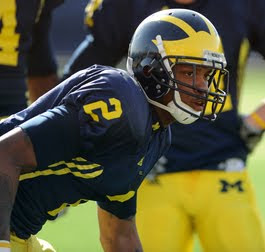 I was wrong about Turner last year. With Michigan’s stunning lack of cornerback talent and depth, I assumed that their second highest rated recruit would be able to step in and at least get backup-level snaps. Unfortunately, Turner had problems passing his Ohio Graduation Test, showed up to fall camp late and out of shape, and couldn’t grasp the defense quickly enough to play. Meanwhile, Michigan’s #2 cornerback Boubacar Cissoko was booted from the team and a 5’9″ freshman who showed up on campus to play slot receiver (Teric Jones) ended the season as a second-string corner. Yikes.

The word from this spring’s practices was that Turner had outgrown the cornerback position, although this time it’s muscle and not chub. He’s apparently a big hitter and could be a solid corner in a Cover 2 defense where he sits in the flat and breaks on underneath routes, but playing man-to-man or covering a deep third isn’t his cup of tea. A position switch to free safety or Bandit seems inevitable, but cornerback depth is still thin and the team might not be able to afford moving him just yet. It’s going to be another wait-and-see season for Turner. Don’t be surprised if incoming freshman Cullen Christian passes him up on the depth chart. If Christian can contribute this season, perhaps Turner can challenge Cameron Gordon, Jordan Kovacs, and Vladimir Emilien for playing time at one of the safety positions.