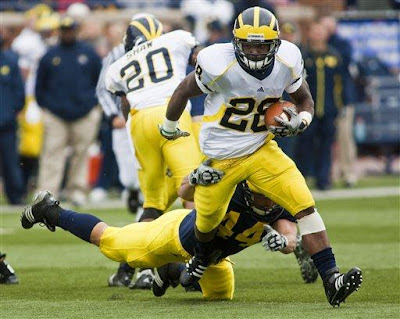 Toussaint entered college as a highly touted running back. I even stated that he would be the best offensive recruit in the 2009 class once all is said and done. Unfortunately for him, the hype fizzled due to an injury (I’ve read conflicting reports, but it was either his clavicle or his scapula). But with the graduation of Brandon Minor and Carlos Brown, the running back position is wide open and Toussaint got a fair amount of reps in the spring.

Reports are that Toussaint would have seen playing time in 2009 if not for the injury, but spring practice reports mentioned that he was a bit hesitant when running the ball. That injury might have had something to do with it, but regardless, he wasn’t extremely impressive in the spring game and he seems to be looking up at Mike Shaw, Vincent Smith, and Michael Cox. Physically, Toussaint has the best combination of size, speed, shiftiness, and hands to be the best back on the team. But that doesn’t mean he’ll be the starter right now.