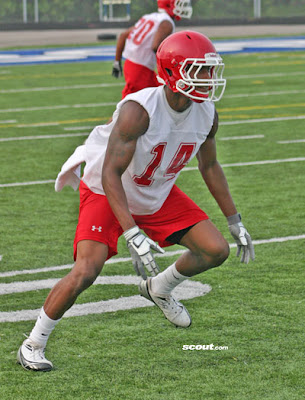 The younger brother of defensive tackle recruit Terry Talbott, Terrence is a small-ish corner. Despite graduating in the same class, the brothers aren’t twins – their birthdays are separated by about nine months. Terrence is an excellent athlete, with good speed and great leaping ability. I’m afraid that his athletic skills don’t quite translate into being a great football player, though. There’s just a little something missing.

But this team needs help in the defensive backfield, and Terrence might be a little further along than Courtney Avery at this point. There’s been some indication from insiders that Terrence’s upside is questionable, and his ceiling might be limited to special teams coverage. I have a feeling that his situation might be similar to that of sophomore defensive back Teric Jones, who played scarce minutes in 2009 because the coaches didn’t want to burn Justin Turner’s redshirt. In other words, the coaches would rather have the player with less upside (Jones, possibly Terrence Talbott) use up his eligibility in four years rather than devoting a scholarship to him for a fifth year.

We’ll see what happens, but I’m guessing we’ll see Terrence on the field against Massachusetts and/or against other teams against whom the score gets out of hand.