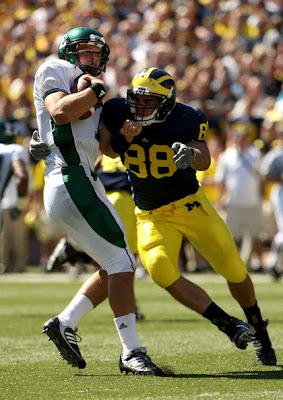 Roh was my choice for the best defensive recruit in the Class of 2009, and he got off to a good start. He started every game last season and despite playing mostly defensive end at 235 lbs. or so as a true freshman, he held his own. Many Michigan fans were surprised at the athleticism he showed throughout the season, especially when he stuck with an MSU tight end on a corner route in the endzone. Roh is the real deal as an athlete, and he’s gained about 20 lbs. since last season. This should help him hold up in the run game a little better.

Roh is not just penciled in, but inked in as the starting OLB/DE hybrid again this year. His backups at the position include Brandon Herron and J.B. Fitzgerald, both of whom are older, but this is Roh’s job. The terminology has changed slightly this year, and many people think Roh will be playing more of a traditional linebacker role now that the defense has been called a “3-3-5.” However, what you see out of him this season will be largely what you saw in 2009; he’s going to be rushing the passer most of the time and dropping into pass coverage occasionally. Defenses can’t play the run or rush the passer with only three rushers, so there will be a lot of blitzing and stunting. Roh should be the object of many of those blitzes, and I expect his sack numbers to jump significantly with his added weight and experience.

I accidentally deleted the poll results, but Ryan Van Bergen was first with over 40% of the vote; J.T. Floyd was second with over 20% of the vote. I believe Roh was third, but might have been fourth.