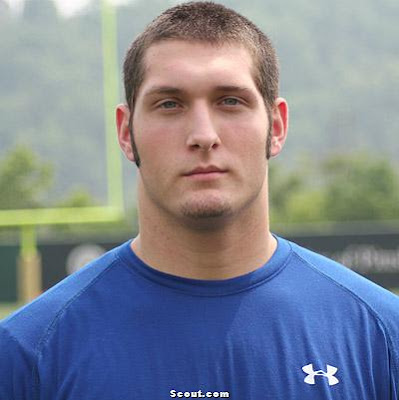 Defensive end was one of the biggest needs for the Wolverines in 2010, and just like in the defensive backfield, Rich Rodriguez went after a bunch of them. With defensive MVP Brandon Graham leaving and precious few options to replace him (Ryan Van Bergen will likely slide over from 3-tech defensive tackle), Michigan successfully recruited five players who are headed for either the 5-tech defensive end position (Graham’s slot) or the Quick end (DE/OLB hybrid like Craig Roh).

Technically, four of the five were recruited for the Quick: Jordan Paskorz, Ken Wilkins, Davion Rogers, and Jake Ryan. Only one (Jibreel Black) was expressly recruited to play strongside end. However, I think it’s likely that a few players will filter to either inside linebacker or the 5-tech end.

The first to commit was Paskorz, a 6’3″, 225 lb. Pennsylvanian. Paskorz committed in May of ’09 and not much was heard from him after that. He chose Michigan over some middling offers from Virginia, Bowling Green, and Minnesota, among others. He looks bigger than his listed size, and he lacks the quickness that we’ve seen from the other Quicks who saw significant action in 2009 (Roh and Brandon Herron). I’ve maintained since he was recruited that I think he’ll end up as a strongside end before all is said and done. The Quick doesn’t drop back into coverage a great deal, but Paskorz would be a liability in coverage.

Shortly after Paskorz’s commitment, another Keystone Stater tossed his hat into the ring for the Quick position – Ken Wilkins. Wilkins is 6’3″ and 244 lbs., and there were quotes floating around from his coach that he has like a 30″ waist and a 60″ chest. He’s like a male Barbie doll, except his chest is made from P90X alloy instead of plastic. I might have exaggerated those measurements, but basically, Wilkins isn’t the type of kid who’s going to suffer from weight issues. I think Wilkins has the athleticism and speed to play Quick, but he’s another candidate to move to 5-tech defensive end, as well. (There was a Rivals article mentioning that Wilkins was told he could play 3-tech DT, but I have to believe that was a typo or a misunderstanding.)

Warren, OH, linebacker Davion Rogers flipped from West Virginia to Michigan in mid-January. He’s listed at 6’6″ and 210 lbs., and he mentioned at one point that WVU’s coaches mentioned that he could play safety for them. That comment convinced me that WVU has some coaching woes coming down the pike. Regardless, Rogers changed his mind almost immediately upon receiving an offer from the Wolverines, so he obviously wasn’t gung-ho about being a Mountaineer. Six-foot-six and 210 lbs. might get a wide receiver on the field immediately, but to be a DE/OLB hybrid, Rogers needs to start hitting the supplements.

A day after Rogers committed, Michigan raided Ohio for another linebacker in the form of Jake Ryan, whose 6’3″, 220 lb. frame might make him a body double for Paskorz. Ryan picked Michigan over a handful of MAC schools, but he outperformed Ohio State-bound teammate Scott McVey (perhaps in part to an injury that slowed McVey). He played outside linebacker for St. Ignatius in their 3-3-5 stack defense, so he doesn’t have much practice being an edge rusher. That being said, Ryan is the most likely of these four Quicks to end up as an inside linebacker.

A week after the commitments of Rogers and Ryan, Jibreel Black was the final end to commit. The last of 11 players from Ohio to pledge, Black is a 6’2″, 253 lb. strongside end. He could grow into a defensive tackle, but with the shortage of 5-techs on the roster, I doubt he’ll move inside. Despite not being an extremely highly touted player to all the recruiting sites, his offer list (including Illinois, Michigan State, South Carolina, and Wisconsin) was the most impressive.

Predictions: In my opinion, Jordan Paskorz is headed for a redshirt year, during which he’ll bulk up and become a 5-tech DE; I do not see him contributing in any more than a backup role throughout his career. Wilkins could be a very good player at either position; I think he’ll start off at Quick but eventually play DE. Rogers is almost certainly headed for a redshirt, but his position is perhaps the most defined – he’s a Quick through and through; his athleticism could turn him into a feared speed rusher in the Big Ten, but he has to put on some weight and refine his fundamentals. With the shortage of inside linebackers, I think Jake Ryan might end up at inside linebacker immediately, and I would not be surprised to see him play in mop-up duty this year; the coaches need to groom some guys to take over for fifth-year senior inside linebackers Jonas Mouton and Obi Ezeh. Black will likely play in 2010 as well, because the depth at strongside end is essentially Van Bergen, redshirt freshman Anthony Lalota, and walk-on Will Heininger.

Grade: B. Despite going after a bunch of highly touted ends, Michigan ended up with 3-stars galore. While a few are headed for solid careers, in my opinion, only one is certain to be a very good player (Black). Luckily, by sheer quantity, at least one or two of the other guys will likely end up as pretty good players. If you can’t get great quality, go for quantity.