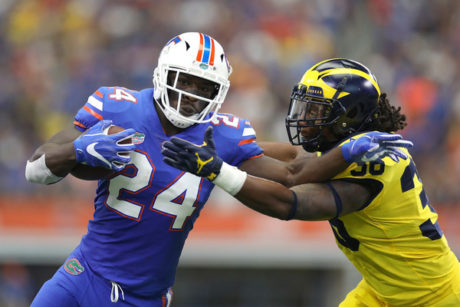 Gil redshirted in 2016 and then stepped up into a backup role in 2017. He even got credit for a start against Florida. He played in thirteen games throughout the year, but Michigan spent most of the time with Mike McCray at weakside linebacker, leaving very few snaps for backups.

I have almost zero confidence in this ranking, but Don Brown called Gil a “dude” and insiders are suggesting the WILL linebacker spot is Gil’s to lose. I haven’t really seen anything from him that suggests he should be the next starter at the position, so his presence here at #27 is largely based on hype. The Wolverines have other options at WILL, including Josh Ross and freshman Cameron McGrone. A starter is a starter, I guess, and Gil is the first projected full-time starter to come off the board. The good thing is that if Don Brown thinks he can play, he can probably play. I’ll be interested to see how he looks when the season rolls around.