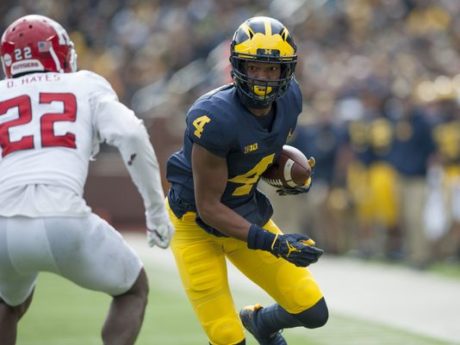 If the new redshirt rule had been in place in 2017, this is the type of player it would have benefited. Collins was a little bit raw early on, and more was expected from some upperclassmen. When Tarik Black got hurt and when the upperclassmen didn’t produce, the coaching staff burned Collins’s redshirt. He played for the first time in game seven, which immediately ruined his chances of keep his redshirt, since it was so late in the season. Collins made 1 catch against Rutgers and then finished the season with 2 catches for 15 yards against South Carolina in the Outback Bowl. It was a forgettable first season, but I think it was significant that he forced his way onto the field.

Collins should be a more important piece of the offense this season. Going from #68 to #34 is a significant jump, and putting a guy with 3 career catches in the top third of the countdown might seem like a stretch. However, Michigan doesn’t have a ton of depth at wide receiver, because Kekoa Crawford is transferring, Maurice Ways is at Cal, and Drake Harris is at Western Michigan. Collins is part of the awesome 2017 wide receiver recruiting class that included Black, Donovan Peoples-Jones, and Oliver Martin. Collins is probably the primary backup on the outside, and those guys get a lot of playing time. I think he’s a notch below Black and Peoples-Jones, but this has the makings of a stacked wide receiver corps. Last year the wideouts didn’t get a ton of targets, but Ole Miss had four wide receivers with 39+ catches (note: Michigan’s top WR in catches was Grant Perry with 25). If Michigan builds the offense around new quarterback Shea Patterson, Collins could be in for a big jump in production. I don’t think he’ll get to 39 catches because Michigan will still probably run the ball and employ several tight ends, but I could see 20 receptions for Collins.