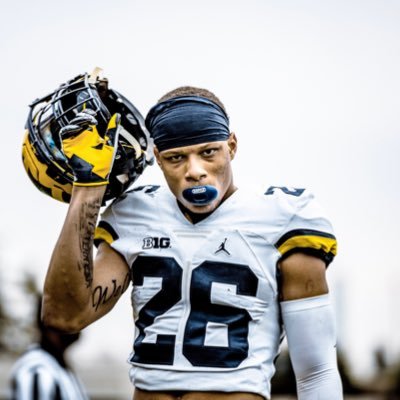 Name: J’Marick Woods
Height: 6’3″
Weight: 203 lbs.
High school: Florence (AL) Florence
Position: Safety
Class: Sophomore
Jersey number: #26
Last year: I ranked Woods #54 and said he would be a backup safety and special teamer (LINK). He made one start and totaled 9 tackles and 0.5 tackles for loss for the year.
TTB Rating: 80

For a first-year safety at Michigan, Woods had a solid season. Safety is not an easy position to play as a true freshman when the game is moving quickly, the defense gets more complicated, and you have to communicate so much with your teammates while processing everything the opposing team is doing. Luckily for Woods (and Michigan), there were a couple more veteran guys to handle the majority of the snaps, while Woods was able to sit back and learn. He played spot duty before earning a start in the Outback Bowl against South Carolina.

This year Woods is roughly in the same spot as last season, but with an extra year of experience under his belt. Starting safeties Josh Metellus and Tyree Kinnel return, and so does utility man Jaylen Kelly-Powell, who has earned a lot of off-season hype. The safeties were the weak spot of the defense last season, however, and Woods could supplant someone like Metellus if he’s unable to improve on his performance from last year. Woods is known as a big hitter, but he needs to work on his coverage before becoming a full-time player. And once Kinnel graduates after the 2018 season, Woods could step into a starting role in 2019.