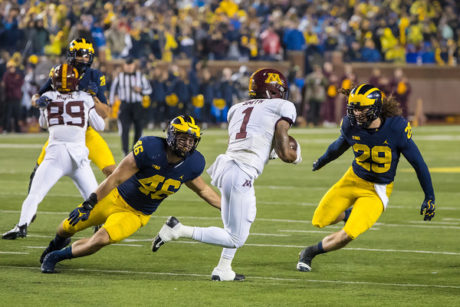 Glasgow is part of a family that already sent two walk-ons (Graham, Ryan) through Michigan who ended up starting and then getting drafted into the NFL. In the spring of 2017, Glasgow looked like a front-runner to start and replace Delano Hill or Dymonte Thomas, both of whom graduated after the 2016 season. He played well in last year’s spring game and Michigan’s only other options were the unproven Josh Metellus (safety), the unproven Khaleke Hudson (Viper), and freshmen.

It turned out that I overrated Glasgow’s impact, though he was named the team’s Special Teams Player of the Year. Metellus and Hudson ended up starting at Glasgow’s potential positions, and he didn’t play much on defense.

This year I’m readjusting downward for Glasgow based on the 2017 season. Hudson has established himself, and while Metellus struggled, Glasgow has not been mentioned as one of the threats for his position. J’Marick Woods, Jaylen Kelly-Powell, and transfer Casey Hughes might take some Metellus’s snaps, but probably not Glasgow. At least not in crunch time. Glasgow will definitely play special teams, though, and he will probably be an important factor on the coverage units.