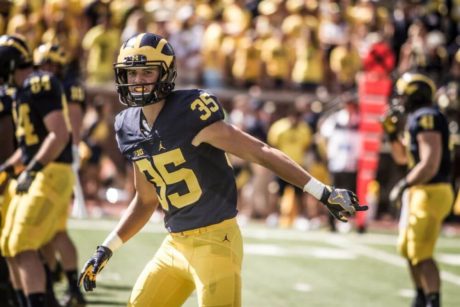 Schoenle was that rare walk-on who played as a true freshman back in 2016. Last year he stepped up his playing time, making 4 catches, including a couple spots that weren’t garbage time (Purdue, South Carolina). He was usually a sign that a running play was coming, and if you guess a toss crack sweep was coming when he was in the game, you’d probably be right 72% of the time.

Nothing against Schoenle, but somebody else could make those 4 catches and block on some toss sweeps. I’m bumping him down a few spots, even though I don’t expect his role to change a ton. If Michigan does become a bit more pass-happy with a (hopefully) improved offensive line and a new quarterback, then maybe the offense will put somebody else in who can be a little more explosive. There’s also been some buzz about fellow walk-on Jake McCurry. If McCurry takes snaps from anyone, I would imagine it would be Schoenle. After all, how many snaps for walk-ons are there when you have a bunch of highly touted receivers available like Tarik Black, Donovan Peoples-Jones, Nico Collins, and others? Schoenle is a good guy to have on the team, but probably not a necessary component for team success.