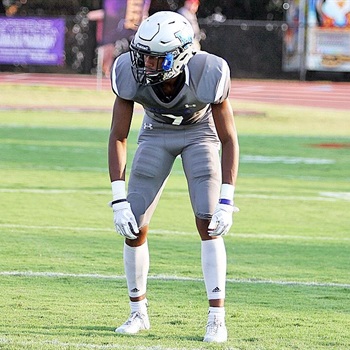 Sims was an Under Armour All-American after his senior year, where the coaching staff moved him to free safety. He looked tentative and very willowy at free safety, which was a little bit concerning. That’s because Michigan will ask him to be physical, whether he’s playing cornerback or safety. There’s nowhere to hide in Michigan’s defense if you’re not willing to be aggressive.

Even so, Sims is the highest rated defensive back in Michigan’s 2018 class (4-star, #17 CB, #170 overall) and enrolled early back in January. He got an extra semester of work in Michigan’s system, and he got some extra time to work on adding to his stringy frame in a college S&C (and nutrition) program. Michigan hasn’t been shy about playing freshman cornerbacks, and they need to consider that anywhere from 1-3 cornerbacks will be gone next year (Brandon Watson for sure, plus David Long and Lavert Hill as possibilities). Ambry Thomas and Benjamin St-Juste both played as freshmen last year, and Hill/Long played as freshmen in 2016. If Sims plays like the top corner in Michigan’s 2018 class, then I think they’ll groom him for action next year.