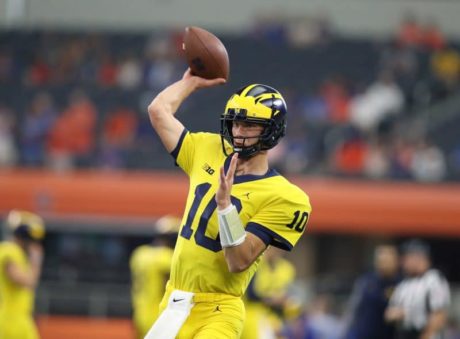 McCaffrey was Michigan’s ballyhooed quarterback in the 2017 class, an Army All-American with great bloodlines. But he was really skinny and a little bit raw. With some more experienced (and perhaps more talented) quarterbacks on the roster last season, McCaffrey wasn’t needed. Michigan went through three quarterbacks (Wilton Speight, John O’Korn, and Brandon Peters) before going back to O’Korn when Peters got hurt, but they never pulled the redshirt off of McCaffrey.

This year Speight and O’Korn are gone, but Shea Patterson was brought in from Ole Miss to be the starter. Peters remains. Early talk from the spring was that McCaffrey had passed Peters, but then Peters got out of his funk at the end of spring to retake the lead. What’s the truth about how that will shake out? I don’t know, but Peters has experience on his side, and he did play well for stretches last year. My guess is McCaffrey will be #3 on the depth chart, but that may fluctuate, just like the O’Korn/Peters thing was flexible last year.