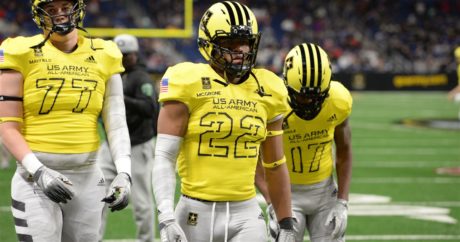 McGrone tore his ACL as a junior, but in just a few months, he was basically back to full speed and wowing college coaches. He played his senior year and tallied all of the above statistics in just seven games. He parlayed that into a U.S. Army All-American Bowl invitation, a game in which he played pretty well and was named by some as one of the top performers. He showed off his sideline-to-sideline speed and came downhill, too. In fact, he was so good that 247 Sports bumped him up to a 5-star, the #1 outside linebacker, and the #24 overall player in the 2018 class. (The 247 Composite has him as a 4-star, the #7 OLB, and #114 overall.)

McGrone is a talent like Devin Bush, Jr., whom Michigan was unable to keep off the field as a freshman. McGrone isn’t quite so stout, but he might be a little more athletic, especially now that he’ll be almost two full years removed from his ACL surgery. Last year Michigan played Joshua Ross in a bit role to help prepare him for playing time in 2018, when he’ll battle Devin Gil and others for the WILL position. Now that Mike McCray II is graduated, Michigan might follow suit with McGrone, who could potentially replace Bush in 2019 if Bush jumps to the NFL after his junior year. Either way, I think McGrone will see the field this season, whether it’s on defense or special teams.