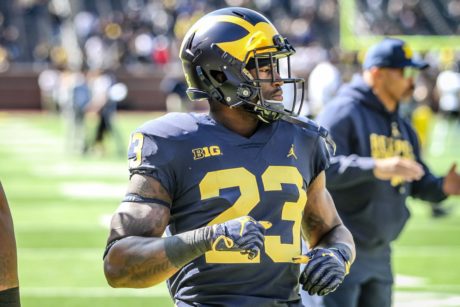 Samuels really had business wasting a redshirt last year on 8 carries in garbage time, but that’s the nature of the beast sometimes. Tru Wilson or Joe Hewlett or Kareem Walker or someone else could have taken those 8 carries with no issue, and now Samuels has just three years of eligibility remaining instead of four. His 1.6 yards per carry don’t look very appealing, but I go back to Karan Higdon’s 1.73 yards/carry in 2015 and shrug my shoulders.

Samuels was listed back in the spring as the #4 guy on the depth chart, behind Higdon, Chris Evans, and walk-on Tru Wilson (full disclosure: this list was made before Jim Harbaugh’s discussion of the depth chart and Kareem Walker’s departure). A minor injury may or may not have contributed to him being slotted at #4. The #4 guy last year (Walker) got 20 carries. Samuels will also have to fend off incoming freshman Christian Turner, whom I mentioned as a possible contributor as early as this year. I don’t see Samuels getting a lot of opportunities this season, and the backfield is getting crowded. He does have some serious speed, so hopefully he gets a chance to show it in the open field at some point, whether it’s in the passing game or on special teams.