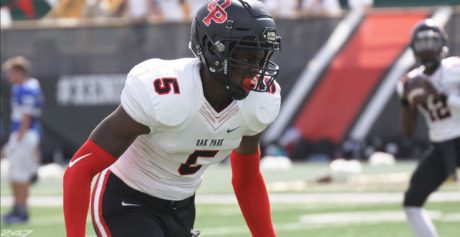 C.J. Dixon – QB – Loganville (GA) Grayson: Dixon is a 6’5″, 210 lb. prospect with offers from Alabama, Florida, Georgia, and Ohio State, among others. He’s a 4-star, the #11 pro-style quarterback, and #295 overall. This past season one of his linemen was Michigan commit Trente Jones, so that may give him a little consideration; however, Grayson is a powerhouse program in Georgia, so lots of his teammates will be scattering to a variety of big-time programs.

Cameron Martinez – WR – Muskegon (MI) Muskegon: Martinez is a 5’11”, 175 lb. prospect with offers from Boston College, Indiana, Kentucky, Northwestern, and a bunch of MAC schools. He’s a 3-star, the #37 athlete, and #465 overall. Despite a fair amount of talent in Muskegon, it’s rare that players from the area end up coming to Michigan. The last prospect to end up in Ann Arbor was defensive tackle Terrance Taylor. Martinez plays quarterback in high school but likely projects to playing slot receiver in college.

Kevin Pyne – OT – Millis (MA) Milford: Pyne is a 6’7″, 275-pounder who was originally a member of the 2020 class but recently reclassified to 2019. His recruitment appears to be coming down to Notre Dame and Notre Dame, with Notre Dame the odds-on favorite.

Jake Wray – OT – Marietta (GA) Marietta: Another Marietta product, Wray decommitted from Ohio State, where his brother plays. The decommitment came after the hiring of new head coach Ryan Day. Jake is a 4-star, the #16 offensive tackle, and #123 overall. He also has offers from Alabama, Florida, Georgia, LSU, and Notre Dame, among others.

Harrison Bailey – QB – Marietta (GA) Marietta: Bailey committed to Tennessee. He was Michigan’s top target at the quarterback position, and the Wolverines were thought to have a slight lead for several weeks leading up to the announcement.

Logan Parr – OG – Heliotes (TX) O’Connor: Parr committed to Texas not long after taking a visit to Michigan and earning his offer from the Wolverines on the trip.