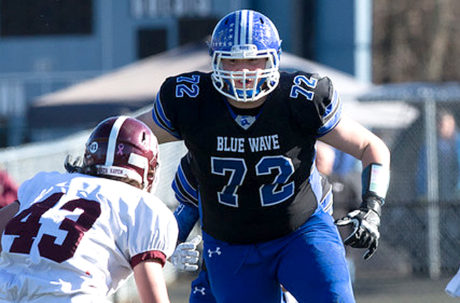 Darien (CT) Darien offensive tackle Andrew Stueber committed to Michigan on Saturday. He chose the Wolverines over offers from Maryland, North Carolina, Penn State, Pitt, Tennessee, and Virginia, among others.

Hit the jump for more on Stueber’s commitment.

Stueber was a relative unknown in the Michigan recruiting world until he participated in the Big Man Camp at Michigan on June 18. The coaching staff went ahead and offered after the camp, and he immediately vaulted the Wolverines to the top of his list. Previously, he had been considered a probable Penn State Nittany Lion.

Stueber has good size and length for the offensive tackle position. He’s listed at 6’6″ and anywhere between 285-305 lbs. on the recruiting sites, but he has the frame to add the necessary weight if he’s lacking it. The #1 thing that stands out to me on his film is his willingness to finish blocks. He drives people into the ground, and when pass rushers get their hands up, he has the instinct to bash them in the chest and get their hands down. Stueber is decently athletic and mirrors pass rushers well, and he shows good awareness to work combo blocks up to the second level.

On the negative side, Stueber is very inconsistent with his pad level. He has the ability to bend, especially when down-blocking, but he stands straight up in his pass set. Connecticut – not known for its football – doesn’t have many defensive ends capable of matching up with his size and strength, so his mediocre technique doesn’t bother him a great deal there. However, he will need to sit lower and maintain leverage when he faces better competition in college. He also has a tendency to hold defenders, especially on the second level, and he needs to learn a) how to keep his hands inside a defender’s frame and b) when to let go. When the ball is 20 yards away, he doesn’t need to hold a linebacker who’s falling down, anyway.

Overall, Stueber is a good pickup. He’s a strong, smart player with pretty good technique. Pass protection is a work in progress, but I think the desire is there. He’s the type of player who started the transition of Stanford from ew Stanford to wow Stanford. He can be a road grader up front, probably at right tackle or one of the guard positions.

Michigan is absolutely destroying Connecticut in recruiting. Along with fullback/linebacker Ben Mason, the Wolverines have commitments from two of the top four prospects in the state. (The top two are Cheshire Academy’s Tarik Black and C.J. Holmes, both of whom have Michigan offers.) There are now 16 commits in the 2017 class, including two offensive linemen. Technically, Michigan only has room for 19 graduating scholarship seniors to be replaced (LINK), but that number will grow.