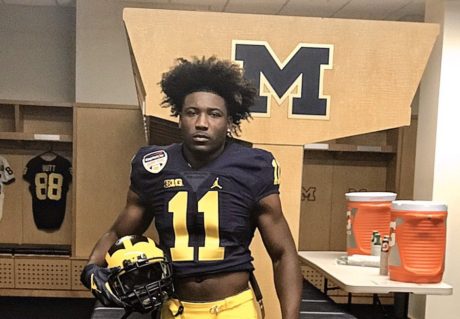 NOTE: You know the cliche among recruiting people that a player usually commits when we go on vacation? Well, it’s not not true.

Hit the jump for more on Thomas’s commitment.

Thomas played at Fairburn (GA) Langston Hughes and transferred to IMG Academy this off-season. He was offered by the Wolverines this spring and immediately took a liking to the program. It was reported before he visited this past weekend that he would probably commit to Michigan if the coaches reciprocated interest in having him commit at this time, and he went ahead and made the pledge public.

Thomas is a hard-hitting inside linebacker prospect who lines ball carriers up for kill shots, but he also usually wraps up rather than just going for shoulder blows. He plays downhill and fights through trash pretty well, using his hands to disengage from blocks and some short-area quickness to dodge linemen. He takes short, choppy steps and drives his feet through contact.

Thomas has to get bigger and stronger, and it would be ideal if he could add an inch or two to his frame. Sometimes when he takes on blockers or ball carriers, he gets blown back a bit because he gets overpowered. Since he will probably be an inside linebacker, he’ll have to take on fullbacks, linemen, and downhill runners with regularity. While he has adequate speed for an inside linebacker, he probably does not have the athleticism to be an outside linebacker in Michigan’s system.

As a future middle linebacker or weakside linebacker, I think Thomas has a good future. He’s not a flashy player, but he’s in the mold of someone like Joshua or James Ross, hard-hitting inside linebackers without imposing size or elite speed. When he arrives on campus, Michigan will be replacing Noah Furbush and Jared Wangler at linebacker, though Thomas will have to fight a bunch of other prospects with a year or two of experience over him.

Michigan now has its first commitment for the class of 2019. Right now there are 15 spots scheduled to open up for 2019 (LINK), but obviously a lot of things will change between now and then. It should be a large class by the time everything settles out.

TTB Rating: I won’t hand out an TTB Rating until the 2018 class finishes out, but tentatively I’d place him in the low 80s for now.