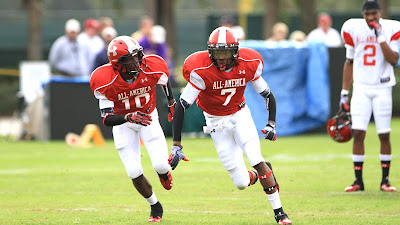 
This is a few days old, but that’s what happens when 25 inches of snow pour down and you have to retreat to safer shelter.

On National Signing Day, Demar Dorsey from Lauderdale Lakes, FL, committed to Michigan. In the overall rankings, Dorsey is #12 to ESPN, #162 to Rivals, and #203 to Scout; many would latch onto that #12 ranking, but ESPN proves over and over again that they know nothing about recruiting, so take that with a grain of salt. Anyway, Dorsey’s commitment was somewhat of a surprise, since he wasn’t on Michigan fans’ radar until about a month before NSD. Dorsey had been committed to Florida for over a year and seemingly visited just to have a good time with his cousin, Michigan quarterback Denard Robinson.

According to Dorsey, though, he knew during his official visit (that coincided with Michigan’s basketball victory over Connecticut) that Michigan was The Place. It’s unclear whether Florida dropped Dorsey or vice versa, but either way, he also visited Florida State and USC late in the process, so he had the experts confused; most seemed to think he’d ultimately sign with FSU.

I would be remiss not to mention Dorsey’s issues as a minor. He had some trouble with the law, but was never found guilty of any wrongdoing and participated in a diversionary program. I will not go into details, as they have been discussed ad nauseam elsewhere. I’ll let it suffice to say that Rodriguez is taking a bit of a public relations risk with Dorsey, on the heels of the Justin Feagin situation last year; however, most football coaches taken chances on talented kids with checkered pasts. Hopefully, the diversionary program worked for Dorsey and he can move on to be a productive student and citizen at Michigan.

Back to football, though, Dorsey’s position is a bit up in the air. The coaches told him he could play some wide receiver, and he could probably help in the return game, but but he’s a defensive back of some sort. Some project him as a strong safety at Michigan; others predict he’ll be a cornerback. I feel fairly confident in predicting that Dorsey will battle for playing time at the cornerback position as a freshman in 2010. Michigan has zero experienced cornerbacks returning in 2010 with the departure of Donovan Warren to the NFL. Besides redshirt sophomore J.T. Floyd, every other cornerback on the roster will have freshman eligibility – Justin Turner, Cullen Christian, Courtney Avery, and Terrence Talbott. Michigan needs to throw every available body at the cornerback spot and whichever one performs best should get the job.

Michigan’s most experienced cornerback isn’t really a cornerback, but a strong safety – Troy Woolfolk. Some have suggested that Woolfolk should move to cornerback and Michigan should play a freshman at strong safety, but that would be disastrous. The only time Woolfolk got burned at the strong safety position was in the 2009 opener when he and the aforementioned Floyd got burned against Western Michigan. In practice, Woolfolk earned the nickname “The Eraser” for his ability to cover up for everyone else’s mistakes. Experience is necessary on the back end of your defensive backfield, because young guys get out of position and get fooled by double moves, play action, etc. It’s no coincidence that Michigan’s defense went south once Woolfolk moved to corner in mid-2009.

With Woolfolk at strong safety and presumably Justin Turner at one cornerback position, the trio of Floyd, Christian, and Dorsey should fight it out for the other corner. Michigan’s coaches did everything they could to keep Floyd off the field in 2009 (they’d rather have Jordan Kovacs playing strong safety than have Floyd play corner), so I sincerely doubt he’ll start. Dorsey is a better athlete than Christian, but the latter’s coverage skills are more refined, so that’s kind of a toss-up.

Dorsey is a burner. As a junior, he finished second to Denard Robinson in the state 100 meter finals with a time of 10.60 seconds (compared to Robinson’s 10.44). He later ran a 10.55 and has even claimed to have run a 10.3, although I can find no recorded evidence of that time. This athleticism should allow him to run with just about every receiver he faces. It also would allow him to cover a lot of ground from the strong safety position.

However, we can see some of his rawness in the video below. First of all, he’s only 175 lbs. In the second still shot (the one from the Under Armour All American game), we can see his scrawny little leg; he has a decided lack of bulk. In the first highlight from the UA game, he causes a fumble on kick coverage. He does a good job of mirroring the returner, but then he reaches and grabs the jersey, flinging the ball carrier to the ground and causing the fumble; this is the tackling technique of a raw cornerback, not the strong safety who is supposed to be a team’s last line of defense. Later in the highlights, he plays a ball from the deep middle safety position. Unfortunately, he takes a bad angle to the football; instead of meeting the ball at its highest point or at least aiming to punish the receiver, he takes the path of least resistance and gets a hand on the ball after it gets past the receiver.

All of these factors lead me to believe that Dorsey will be better off starting his career at cornerback. Further evidence exists in that Rich Rodriguez said as much in his signing day press conference. This does not mean that Dorsey couldn’t move to strong safety eventually. He could probably be a pretty good strong safety with some technique and experience under his belt. But that won’t happen until at least 2011.