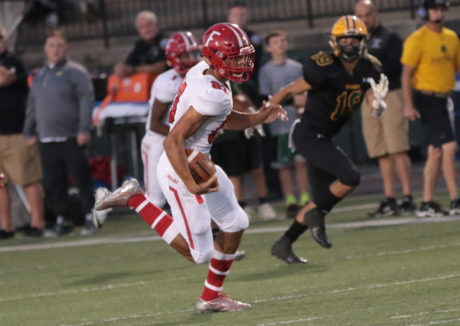 Fairfield (OH) Fairfield tight end Erick All committed to Michigan on Sunday. He chose the Wolverines over offers from Florida State, Michigan State, Notre Dame, and Wisconsin, among others.

Hit the jump for more on All’s commitment.

All was a late-ish offer for Michigan, who had been pursuing Luke Deal heavily. When it looked like Deal was out of the picture, Michigan extended an offer to All. Things progressed fairly quickly between the two parties, and All camped at Michigan early last week. He took an official visit to Ann Arbor this past weekend, which resulted in the commitment.

All has a decent frame at 6’4″, 225 lbs. He’s a ready and willing blocker, and Fairfield uses him in a variety of ways, whether it’s split out, as a motion man, as a lead blocker on isos, as a kickout guy, etc. He should be able to add some weight to that frame, but I imagine he’ll top out around 245 lbs. or so. As a receiver, he shows decent hands and run-after-the-catch ability. He’ll fight for extra yards and tries to avoid going out of bounds. He seems to be at his best running crossing routes, which is great, because that’s where Michigan will have its most success with the tight ends.

There’s nothing about All that truly stands out other than his willingness to run at and through people. He needs to add weight and strength, and he probably needs to become more adept at putting his hand on the ground. I think Michigan will use him more as an H-back type, but that could limit his usage. His speed is good, not great.

Overall, this is an okay get for Michigan. All has upside as a slightly above average Big Ten tight end, and he will have plenty of opportunities at Michigan with all the offensive sets they roll out with tight ends galore. I don’t expect him to make a run at a Mackey Award, but I think he’s a guy who can make 12-18 receptions a year once his body matures. I think he will probably redshirt as a freshman, and by then, there may be lots of opportunity with Zach Gentry, Tyrone Wheatley, and Sean McKeon gone.

Michigan now has 12 commitments in the class of 2019. All is the only tight end in the class following a 2018 cycle in which the Wolverines took Mustapha Muhammad and Luke Schoonmaker. According to the Bentley Library’s database, Michigan has never had a football player from Fairfield.