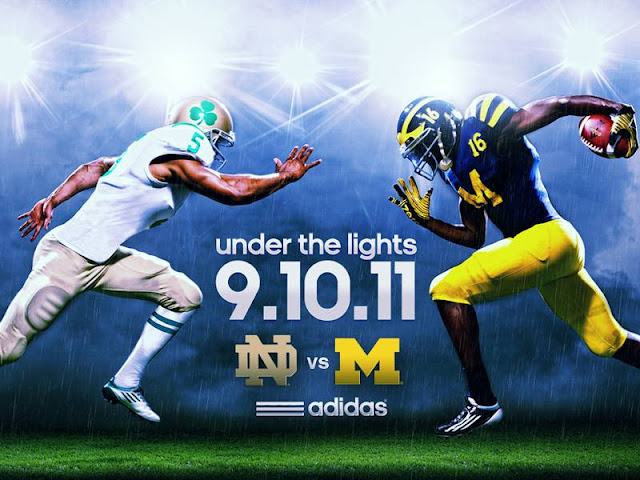 With about 30 seconds remaining in last night’s game and Notre Dame up 31-28, I said to my fellow watchers, “I predicted Notre Dame would win by a score of 31-27.  I don’t want  that to be the score, but that was my pick.”

I’m glad I was wrong.

That was one of the most exciting games I’ve seen as a Michigan fan.  It reminded me of the 2004 “Henne to Edwards Game”, a victory over MSU in which quarterback Chad Henne chucked the ball up repeatedly to wide receiver Braylon Edwards, who decided to just flat-out win the game for his team.  With Michigan down 17-7 at halftime, I thought to myself, “Well, hopefully Brady Hoke returns to the ways of Lloyd Carr and they become a ‘second half team.'”  Uh . . . yep.  The Wolverines scored 28 points in the fourth quarter, including 14 in the final 1:12 to steal a victory from the Irish.

Denard Robinson sucks is awesome.  I have to admit there was a time that I thought this was going to be Robinson’s worst game as a starter.  Early on he was just plain inaccurate.  Then he became inaccurate and  made poor decisions.  Then he made poor decisions . . . accurately.  Robinson finished the game 11-for-24 for 338 yards, 4 touchdowns, and 3 interceptions.  He also carried the ball 16 times for 108 yards and 1 touchdown.  His total of 446 yards and 5 touchdowns was excellent, but how he got there was strange.  Through three quarters of football, he was 4-for-14 passing (if that accuracy rate sounds familiarly horrible, that’s because it’s the same as Michigan’s kickers circa 2010) for 136 yards, 1 touchdown, and 2 interceptions.  In the fourth stanza, Robinson went 8-for-11 for 217 yards, 3 touchdowns, and 1 interception, plus a recovered Stephen Hopkins fumble that he turned into a touchdown.

Notre Dame is awesome sucks.  I do think Notre Dame is an improved team this season, but they have nothing to show for it.  They won their final four games in 2010 and had two opportunities for victories to open 2011, but they blew both chances.  They remind me of Michigan from the past couple years – able to move the ball, but turnover prone; the Irish have 9 turnovers in two games.  Quarterback Tommy Rees looked excellent at times, but he also threw an ill advised pick to cornerback J.T. Floyd, failed to see Jordan Kovacs dropping back for another interception, and let the ball slip from his hand in the red zone late in the game, a fumble that defensive lineman Ryan Van Bergen recovered.  Overall, Rees was 27-for-39 for 315 yards and 3 touchdowns.  Receiver Michael Floyd caught 13 of those passes for 159 yards, but failed to turn any of those receptions into scores.

Thank goodness for Junior Hemingway.  There were lots of “heroes” in the game – Robinson, Jeremy Gallon, Roy Roundtree, Jordan Kovacs, Matt Wile, etc.  But none were more important than Hemingway, whose amazing body control saved Robinson’s ass time after time.  Robinson completed only 46% of his passes on the day, but two of his eleven completions were amazing catches by Hemingway for big plays.  His first of the day was a 43-yard TD reception on which he leapt high in the air, came down with the ball, and blasted his way through a Notre Dame defensive back to just barely reach the pylon.  His second was on a horrible decision to throw the ball into double coverage, when he stopped and jumped high in the air once again.  His third was on a crossing route when he kept running despite presumably seeing Robinson in the grasp of a defender; Robinson made his best throw of the night, which Hemingway caught and turned into a 77-yard gain before being tackled inside the 10-yard line.  He ended the night with 3 receptions, 165 yards, and 1 touchdown.  Nobody else on Michigan’s team can do what Hemingway does.

The offense is still explosive.  I hate hate hate it when people like Mark May question Al Borges’ ability to use Denard Robinson effectively.  Michigan’s offense is just fine when Robinson makes accurate throws.  When Robinson is inaccurate, the offense suffers.  But insert any quarterback’s name in that previous sentence and the comment holds true.  Robinson made a few bad decisions in the first half (throwing an ill advised screen pass to Vincent Smith that was picked, throwing into double coverage, tossing jump balls to the 5’8″ Jeremy Gallon, etc.), but there were wide open receivers that Robinson repeatedly missed.  He doesn’t throw an accurate deep ball, and that was apparent last year under “genius” Rich Rodriguez, too.  Robinson got a lot of yardage from bubble screens and short throws last year, but with teams stacking the line of scrimmage and daring Michigan to “pass to win,” those hitches and bubble screens just aren’t going to be there.  The bubble screen worked well for Notre Dame because Michigan was backed off in fear of Michael Floyd.

What happened to Michigan’s defensive line?  I knew Notre Dame’s offensive line would be pretty solid, but so far the defensive linemen have produced very little through two games.  They had 8 tackles, 2 tackles for loss, and 2 fumble recoveries in last night’s contest, but both fumble recoveries were more a function of being lucky than good.  Starters Craig Roh and Will Heininger didn’t register on the stat sheet, and the only production from the backups came from 3 tackles by Jibreel Black and a fumble recovery by William Campbell.  Meanwhile, the team didn’t register a single sack despite 39 pass attempts, and running back Cierre Wood gashed the Wolverines for 134 yards and 5.4 yards a pop.  The linebackers and defensive backs have been outplaying the defensive line in Michigan’s two games.

Pass protection good, run blocking bad.  Except for a Dan Fox blitz that resulted in a quick sack, the offensive line protected Robinson very well.  He did scramble around at times, but usually that was after hanging around in the pocket for a while and not getting rid of the ball.  On the other hand, Michigan’s running backs got zero blocking whatsoever.  They combined for 8 carries, 13 yards, and 1 fumble.  Yikes.  Fitzgerald Toussaint apparently suffered an injury and couldn’t play, and despite having -3 yards, Michael Shaw looked the best of the bunch after he was walled off by defenders and still had the speed to get to the outside.  Hopkins is simply too slow to be a feature back, and he fumbled on the goal line.  Luckily, Robinson was there to pick up the ball and score.  Michigan could also use a new short yardage play, aside from the dive out of a single back formation.

Wanted: A Healthy Troy Woolfolk.  With Eastern Michigan on the horizon, Woolfolk might get a week to rest up a bit.  That would be excellent news for a defensive backfield that lacks size and/or coverage ability.  J.T. Floyd and Courtney Avery were both overmatched by Michael Floyd, which is understandable since they’re both smaller and perhaps slower.  I thought Avery had a decent day despite being flagged on a questionable pass interference call, but J.T. Floyd was picked on all night.  He had a couple nice plays, but he’s just not starter quality.  Woolfolk played sporadically in spite of an ankle injury – which he noticeably aggravated a couple times – and a hand injury that forced him to wear a cast.

Wow.  I wish I could have been there.  If I lived in Michigan, there’s no doubt I would have shelled out the money to attend.  That was the best Michigan crowd I think I’ve seen, and at 114,804, it was the largest in football history, too.  I thought ESPN did an excellent job of encapsulating the enormity of the crowd and the game.  Those in attendance will probably remember that game forever.