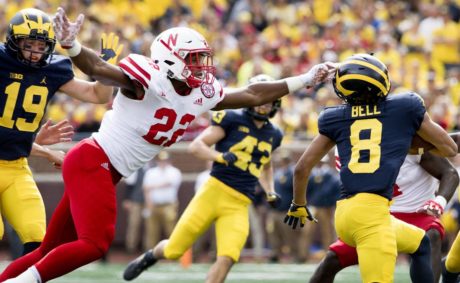 The QB position is in solid hands. For the first time since Jim Harbaugh arrived, it seems like the quarterback position as a whole is finally in a good spot. Shea Patterson (15/22 for 120 yards and 1 TD) was very accurate once again, and when he misses, it’s usually not too far off of where it should be going. He has consistently been hitting about two-thirds of his passes. Then redshirt freshman Dylan McCaffrey (3/8, 86 yards, 1 TD) came in as the #2 guy, and he looked to be in command of the offense yet again. He was putting the ball where it needed to be, and he hit freshman wideout Ronnie Bell perfectly in stride for a 56-yard touchdown. He should have had another touchdown, but sophomore receiver/defensive back Ambry Thomas dropped another deep pass that would have gone for about 50+ yards. Redshirt sophomore Brandon Peters came in late in the game and went 0/1 with an ugly interception, and he looked totally off-kilter on that play. Before he even threw the pass, I was concerned because you could tell his timing and footwork were off on the play-action. That’s a bit concerning, but he’s the #3 guy.

A Christian Turner sighting! There was word in the off-season that true freshman Christian Turner was the #3 running back, but when the season opener came, it was Tru Wilson as the #3 guy. With injuries to Karan Higdon and Chris Evans, Wilson has been playing #2 snaps. Turner had been wearing a cast on his hand, which would obviously limit your snaps as a ball carrier, but he was back in action on Saturday. He looked smaller than expected (I thought it was the 5’6″ Alijah Bradley reincarnated at first), but he played like he showed on film – a tough runner with decent quickness and good vision. He was going against a lot of backups from Nebraska who didn’t seem to have a lot of fight in them, but it was still a positive showing for his first career game action.

The offensive line played its best game. It was a blowout win against a team that didn’t put up much of a fight, but I thought the offensive line looked solid in this game – better than they did against SMU or Western Michigan, two lower-tier programs than Nebraska. Juwann Bushell-Beatty was caving down the right side of the line at times, and left guard Ben Bredeson did some nice work on the left side. The pass protection was not great, but it was better than it had been, and the effectiveness of the run game on the play action passing was evident.

Devin Bush, Jr. is a bad man. Nebraska could not escape from Devin Bush, Jr. when he was still in the game. The Cornhuskers aren’t extremely talented at the running back position right now, but Bush showed his sideline-to-sideline speed once again, and his angles are superb. You almost never see him take a poor angle to get to his destination. He finished with 6 tackles, 2 tackles for loss, and 1 sack. The improvement on the interior defensive line, which allowed Bush to go side-to-side so easily coincided with the return of Lawrence Marshall to the lineup at defensive tackle. That may be just a coincidence, but Marshall has improved from last year. He made 1 tackle and deflected 1 pass that turned into a diving Josh Metellus interception.

Nebraska couldn’t do anything. This game was the type where it almost became boring to watch the other team play offense, because Michigan’s defense was playing so well. It doesn’t matter if you go to the bathroom or to get a snack, as long as you’re only gone for the time span of three plays and a punt. In between, you know there was a short pass snuffed out for no gain, a run that was swallowed up behind or at the line of scrimmage, and then an incomplete pass before the punt. They ended up with 132 total yards, most of which came against the third-stringers in the fourth quarter.

Donovan Peoples-Jones did that thing again. Peoples-Jones had a 60-yard punt return for a touchdown, just like he did last year against Air Force. He took it down the right side, and then he just toyed with the punter by pulling out a loose spin move in the middle of the field shortly before he hit the endzone. He’s such a good athlete that he didn’t need to spin or dive into the endzone, but he did anyway, just to increase the level of difficulty.

Ronnie Bell did that thing again, for the first time. Bell’s 56-yard touchdown catch from McCaffrey was a thing of beauty, but it didn’t look new. Why? Because it was exactly like his whole high school highlight reel. He catches a deep pass, swivels his hips to make a defender flail helplessly, and then speeds his way into the endzone. You can see where that agility would have made him a successful basketball player at Missouri State if he had gone in that direction, but instead, he’s doing those things in front of 100,000 people at Michigan Stadium. I wouldn’t mind seeing him return some punts in the future, too, and it looks like he’s #2 on the depth chart at returner.

Running back roulette. Michigan’s run game this season has been really odd. Karan Higdon came into the season as the #1 guy, and he performed well in this game (12 carries, 136 yards, 1 TD). Chris Evans has looked okay, but he pulled his hamstring last week. Tru Wilson (6 carries, 43 yards) has been playing a lot more than anyone expected, and I already mentioned Christian Turner. What I didn’t expect to see was fullback Ben Mason lining up 7 yards deep as a single back to run some zone plays down near the goal line, but he turned that – and some dive plays from his more traditional fullback spot – into 6 carries for 18 yards and 3 touchdowns. If fantasy football existed in college football, it would be tough to draft the correct Michigan running back right now.

Khaleke Hudson targeted again. Yes, it was the right call, and yes, he deserves to sit out for the first half of next week’s game against Northwestern. He lowered his head and hit the facemask of Nebraska’s QB in a play somewhat similar to when Michigan QB Shane Morris got concussed against Minnesota in 2014. Hudson needs to learn how to tackle. This is two consecutive games where he’s been bounced for targeting, and officials are going to start keeping an extra close eye on him in the future. I don’t think Hudson is a dirty player, but he really needs to focus on the fundamentals of legal tackling.

Will Hart averaged 59.3 yards per punt. The biggest surprise of the year so far is a boring one that casual observers probably haven’t seen on the highlight shows, but Michigan’s punter is averaging 52.6 yards per punt through four games this year. For some perspective, the highest season-long average going back to 2009 was Georgia’s Drew Butler (48.05 yards/punt). Hart would be #2 in the country right now (Georgia State’s punter is averaged 52.8) if he punted enough to qualify. I fully expect Hart’s average to drop as the competition gets tougher and the weather gets colder later in the season, but what he’s doing right now is awesome.