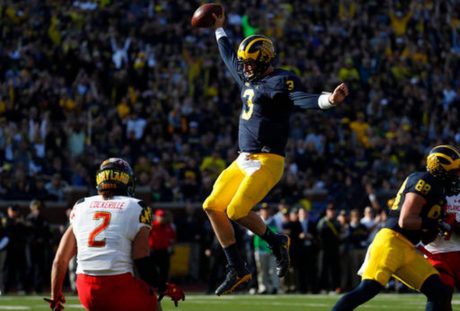 Maryland just doesn’t have the horses. I actually liked what Maryland was doing offensively and defensively, but they just can’t match up physically. They have some speed offensively, but they’re not very good up front and they’re lacking talent on the defensive side of the ball. They knew they couldn’t push Michigan around at the line of scrimmage, so they consistently tried to get to the edge. That worked for a while, but once Michigan figured out that’s all they were going to do, the safeties and linebackers just started booking it for the edge. Lorenzo Harrison III is a pretty darn good running back to have for the future. If the Terps can keep some of that Maryland/D.C. home, then they have a chance to be dangerous in a year or two.

Speight played another great game. I don’t know if this was better than his game against Michigan State, but it was right there. MSU had a better defense, but what really impressed me in this one was Speight’s decision-making, willingness to spread it around, and his throwing on the run. He didn’t force balls into tight spaces, he didn’t lock in on Amara Darboh, and he evaded numerous sack attempts to either dump off the ball or throw it deep. He finished the game 19/24 for 362 yards and 2 touchdowns, and he set a school record for passing yards in the first half with 292.

And so did Mike McCray II. I saw some comments that McCray was a weak point on the edge, but I thought he did a pretty solid job of taking good angles to keep Ty Johnson and Lorenzo Harrison from cutting up. He did lose his grip on a tackle – which was quickly cleaned up by his pursuing teammates – but he was there. I’ve actually been very impressed with McCray’s speed on the edge, even if he has been exposed a couple times when forced to cover wide receivers. He also made an excellent play to chase down Maryland wide receiver T.J. Moore at the 1-yard line just before halftime. McCray ended the game with 5 tackles and 2 tackles for loss.

This was an offensive explosion. A few notes:

Ho-hum 59 points. Believe it or not, 59 points was Michigan’s third-highest scoring game of the year after Rutgers (78) and Central Florida (63). For some perspective, here are the highest scoring efforts from the years under Brady Hoke and offensive-minded Rich Rodriguez:

That’s six games in seven years where Saturday’s score was equaled or topped. There has been a fair amount of discussion about what type of offense is best, whether it’s pro-style, spread-to-run, spread-to-pass, etc. I think this reinforces the idea that any offense can be explosive if it’s run well.

I’m still lukewarm on Delano Hill and Channing Stribling. These two guys are still the ones I’m looking to expose if I’m a future opponent, especially Ohio State. Stribling struggled once again in run support, and Hill just isn’t a 100% effort guy. Despite Maryland running and throwing to the edge over and over again, Stribling made just 1 total tackle. Meanwhile, there were a couple times where Hill just seemed to slow up when chasing ball carriers, particularly when a corner route was completed on him. Hill did make 2 interceptions, but one was thrown directly to him down the middle of the field when there wasn’t a Maryland receiver on the screen, and the other was a ball thrown about 3 yards too far inside when Hill was playing his deep half. Kudos to him for making the interceptions when he had a chance, but I would like to see better effort from him when he’s beaten. He’s solid when things are in front of him, but he seems to check out at times.

How does this prepare Michigan for The Game? Maryland probably used the tunnel screens a little more than Ohio State will, and Ohio State’s going to run inside more. Ohio State’s going to be able to hold up a little better on the line, and J.T. Barrett is more capable of throwing downfield than Perry Hills. But when it comes to formations, system, and tempo, this was a pretty good approximation. People have been underestimating Ohio State, I think, and they had a statement game with a 62-3 win over #10 Nebraska on Saturday.