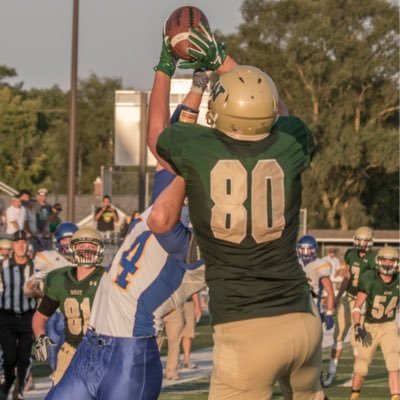 Hit the jump for more on Hayes’s commitment.

Hayes was offered by Michigan in late February. With a lot of players from Traverse City heading toward Michigan State, it seemed at the time that he might follow. Lots of bad stuff has gone down in East Lansing over the past few months, though, and even without those bad vibes, things seem to have been trending toward Michigan. He visited campus in late March and enjoyed himself, and the presence of Greg Frey – who recruited Hayes’s brother at Indiana – helped significantly, too.

Hayes is a tall kid with plenty of room to grow. As a high school tight end in a Dead-T offense, he’s not a fully fleshed-out tackle right now. He bends very well, and one of his strengths should be down blocking and maintaining leverage in the run game. He moves his feet well after contact, and he has the athleticism to release to the second level. He also does a good job of using his hands and finishing blocks.

What he needs to work on is pass protection. Instead of blocking on pass plays, he’s generally running routes. Despite being somewhat of a lumbering tight end, he has solid athleticism for an offensive tackle, but those athletic traits need to be harnessed.

I went on record back in February with the thought that Hayes is the #3 prospect within the state for 2018, and that was before Michigan offered (LINK). He’s a great fit for offensive tackles coach Greg Frey, who has recruited athletic tackles like Taylor Lewan and Michael Schofield previously. Hayes will need at least a year to work on technique and add weight, but I think he could eventually start at either guard or either tackle spot. Michigan has also talked to him about potentially being a blocking tight end early in his career until he’s capable of playing on the line.

Michigan now has 10 commitments for 2018, which is interesting, since there are technically only 9 spots opening up (LINK). The Wolverines have now reached the point where people will have to disappear before everyone who’s committed can enroll. Of course, that type of thing happens naturally all the time with early departures for the NFL, transfers, and injuries, but it’s always curious to see how those spots open up.