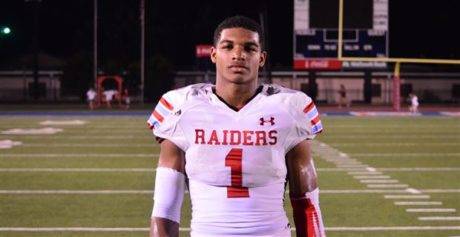 Metairie (LA) Archbishop Rummel wide receiver Ja’Marr Chase was offered by Michigan. Chase decommitted from Florida in early November and also has offers from Auburn, Florida, Florida State, Georgia, and LSU, among others. He’s a 4-star, the #6 wide receiver, and #25 overall. He visited Michigan for the Ohio State game and appeared to have a good time, even sparking some rumors that he silently committed to the coaching staff. You may remember that Michigan recruited safety Carvin Johnson out of Archbishop Rummel in 2009.

Pensacola (FL) Escambia wide receiver Jacob Copeland decommitted from Florida. He’s a 4-star, the #8 wide receiver, and #55 overall, and he has offers from Alabama, Auburn, Clemson, Florida State, Georgia, Miami, and Ohio State, among others. Michigan does not appear to be trying to reel in Copeland at this time.

Southwest Brevard County (FL) Rockledge running back Jashaun Corbin decommitted from Florida State. He was also previously committed to Tennessee. He’s a 4-star, the #6 all-purpose back, and #249 overall. Michigan is not really involved; he recently visited Oregon and has an upcoming trip to Clemson.

Lee’s Summit (MO) West cornerback Mario Goodrich decommitted from Nebraska. He’s a 4-star, the #5 athlete, and #158 overall. Early on it seemed like Michigan would have a good shot, but there hasn’t been any news linking the two parties for several months. Goodrich would seem to fit what Michigan wants – a long, lanky, speedy corner – but it doesn’t seem like anything will develop.

Bradenton (FL) IMG Academy cornerback Houston Griffith decommitted from Florida State. The son of former Illinois and NFL fullback Howard Griffith is a 4-star, the #11 cornerback, and #62 overall. With Jimbo Fisher heading to Texas A&M, Griffith is likely to stay closer to his native Illinois and end up at Notre Dame.

Seattle (WA) Garfield wide receiver Tre’Shaun Harrison decommitted from Oregon. Citing the uncertain job situation of Oregon head coach Willie Taggart – rumored to be going to Florida State – Harrison decommitted and looks like he could potentially end up at UCLA or USC. He’s a 4-star, the #6 athlete, and #159 overall. I discussed Harrison back in May when I talked about the three most impressive highlight films for 2018 recruits (LINK).

Knoxville (TN) Catholic offensive tackle Cade Mays decommitted from Tennessee. This is a huge loss for the Volunteers, since Mays was a very early commit and was a hardcore fan of Rocky Top. He’s a 5-star, the #2 offensive tackle, and #16 overall. Now he’s probably headed to SEC foe Georgia.

Cypress (TX) Cy Springs safety Leon O’Neal, Jr. decommitted from Texas A&M. He’s a 4-star, the #7 safety, and #78 overall. This seems to have something to do with the hiring of Jimbo Fisher, who did not offer O’Neal at Florida State. Now O’Neal seems likely to flip to Oklahoma.

Mission Viejo (CA) Mission Viejo offensive tackle Jarrett Patterson, an Arizona State commit, was offered by Michigan. He’s 6’5″, 285 lbs. with offers from Arizona, Cal, Nebraska, TCU, and UCLA, among others. He’s a 3-star, the #43 offensive tackle, and #566 overall. He will be visiting Ann Arbor later this week for an official visit.

San Marcos (CA) San Marcos wide receiver Kyle Philips, a UCLA commit, was offered by Michigan. He’s a 5’11”, 176 lb. prospect with other offers from Arizona, Arizona State, Oregon, and Utah, among others. He’s a 3-star, the #75 wide receiver, and #447 overall. With the hiring of Chip Kelly, I imagine Philips will remain committed to the Bruins since he’s a guy who seems to fit in pretty well with what Chip Kelly likes to do.

Philadelphia (PA) Imhotep running back/safety Isheem Young decommitted from Penn State. Or, well, the two parties parted ways. Young was arrested for robbing a Wawa gas station in Pennsylvania using a revolver and then walking away with over $13,000 (LINK). He’s a 4-star prospect with an impressive highlight film, but unless this story is proven to be false, this might be the end of Young’s career, at least for a while.

Detroit (MI) Country Day linebacker Kolin Demens committed to UCLA. He remains committed, despite the fact that Jim Mora was fired and Chip Kelly was hired in his stead. Michigan was not pushing and probably won’t, even with the slight bit of upheaval.

Ontario (CA) Colony tight end Michael Ezeike committed to Oregon. Michigan offered him rather late as a tight end, and he ended up picking the Ducks instead. Michigan’s current situation has them heavy at the tight end position with Mustapha Muhammad and Luke Schoonmaker, so even if there’s a coaching change in Eugene, I don’t think Michigan will try to pull Ezeike.

Tampa (FL) Cambridge defensive tackle Richard Gouraige committed to Florida. Gouraige considered Michigan and was planning a visit to Ann Arbor at one point, but that fell through and does not look like it will be rescheduled.

Raleigh (NC) Sanderson defensive tackle Alim McNeill committed to North Carolina State. McNeill is basically a clone of Maurice Hurst, Jr., so it would have been nice if Michigan had been able to pull him.

St. Louis (MO) Lutheran North defensive end Ronnie Perkins committed to Oklahoma. Perkins had named Michigan to his top group and Michigan has some connections at his program, but it wasn’t enough. Perkins could play strongside end or defensive tackle.

Lorton (VA) South County wide receiver Dillon Spalding committed to West Virginia. Spalding named a top two of Michigan and West Virginia, but he was probably not a take for the Wolverines, so he chose the other yellow and blue school. Spalding is one of those prospects who looks like he’s already 22 years old, so by the time he graduates from WVU, I expect him to be balding with some gray speckles in his beard.