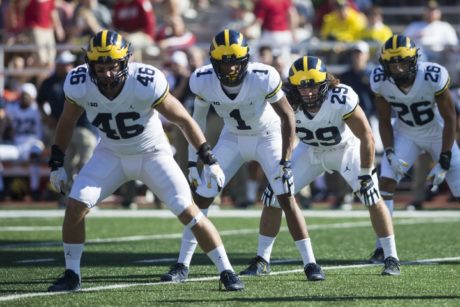 Thomas was one of the most heralded recruits in Michigan’s 2017 class and might have been the jewel of many classes. Unfortunately for him, he was overshadowed a little bit by Donovan Peoples-Jones and others. Thomas was very skinny coming out of high school, and the transition from high school to heavy playing time in college can be difficult, even for talented skill guys. Michigan had two pretty good guys on the outside in 2017, Lavert Hill and David Long. Thomas saw most of his time in the slot and playing on kickoff return.

Hopefully a year under strength and conditioning coach Ben Herbert will help him become a little more physical. I mentioned when I profiled Brandon Watson a couple days ago that Michigan has perhaps its most talented group of cornerbacks in a long time, and that includes Thomas, who would probably be starting at almost every other Big Ten school. Instead, he’s probably going to be a part-timer as the nickel corner, as long as Hill and Long stay healthy. Watson saw more snaps on the outside, while the coaching staff tried to limit Thomas to learning the nickel spot. It’s unclear whether they’ll free him up to play more on the outside this season if needed, but the point is that he should play quite a bit. His kickoff returns were uninspiring last season and his 19.6 yards/return was not impressive, but that additional strength and maturity might help a little bit there. If Hill and/or Long leave early for the NFL after the 2018 season, look for Thomas to get his shot.